The energy market is rapidly changing, and businesses are seeking alternative energy sources that meet their security, affordability, and sustainability needs.

Coupled with carbon capture, utilisation, and storage (CCUS), hydrogen is a must-watch topic. We’ve put together a comprehensive guide to CCUS and hydrogen, to help you understand their future role in the energy mix.

CCUS is important because it has the potential to help lower the rate of CO2 that is released into the atmosphere. It will be a vital aspect of helping the UK reach net zero by 2050.

How does it work?

There are three different phases that make up CCUS: capture, transport, and storage.

Capture – The most common form of carbon capture is artificial capture and storage, which refers to CO2 emissions emitted from human-made processes. Most business will utilise artificial capture from power stations, industrial facilities, or directly from the air.

Transport – Once captured, the carbon must be transported – either to storage or to be reused. The most cost-effective and well-practiced option to transport captured carbon is through pipelines. CO2 can be transported through some pipelines that already exist, so new construction is not always necessary. In North America, there is already 800km of piping system in place. Captured carbon can also be compressed in the form of liquid and transported via road or ship.

Storage – If carbon is not reused for other energy production, it is stored permanently in depleted gas or oil reservoirs, or underground geological formations deep beneath the earth’s crust. Here, it will remain undisturbed without threatening to re-enter the atmosphere. 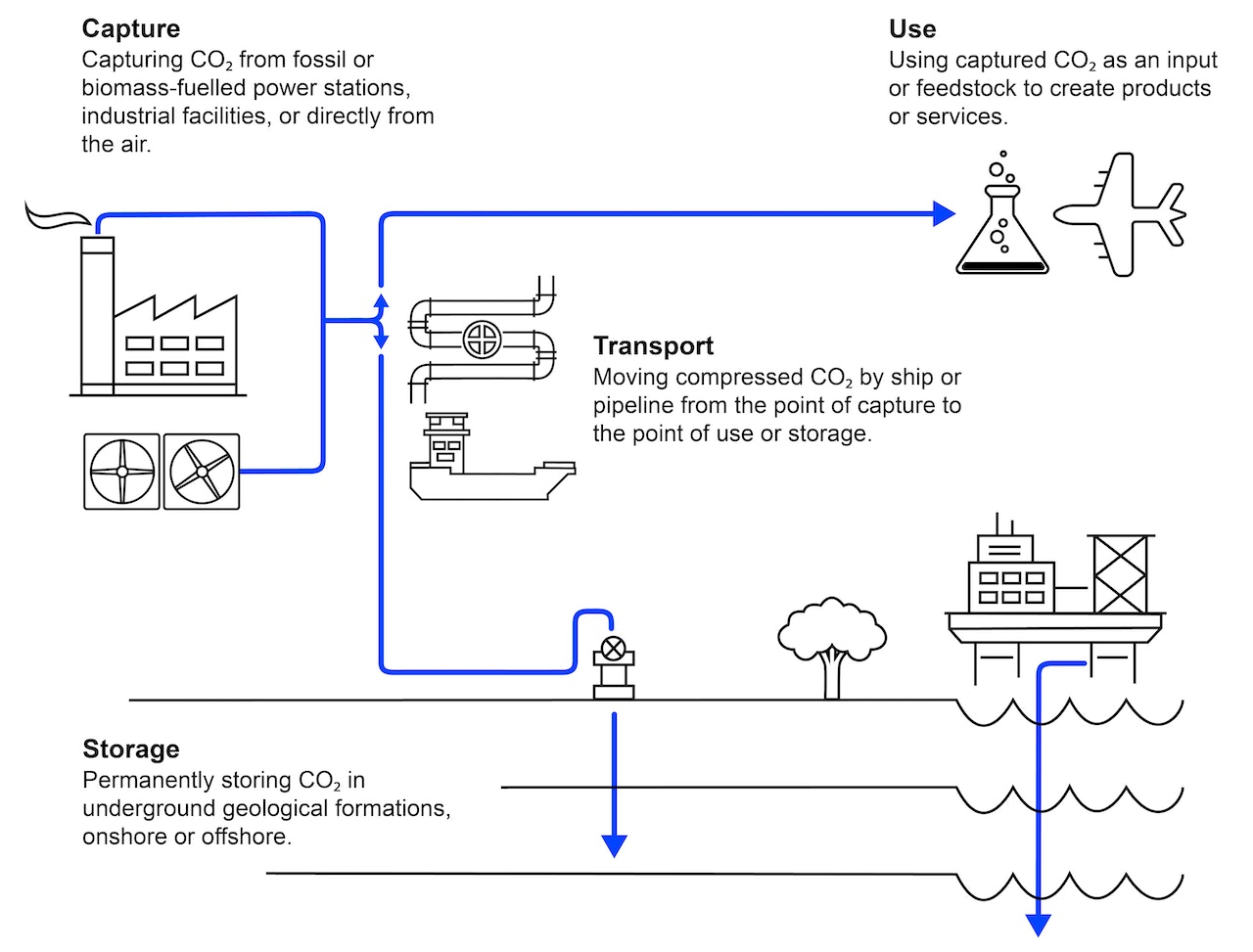 Why is CCUS important for energy-intensive businesses?

CCUS is going to play a pivotal role in helping the world reach net zero emissions.

Industry accounts for about 30% of global greenhouse gas emissions, mostly in the form of carbon dioxide. Renewable energy sources are not currently up to par with the high heat and energy demands of some industries – like those that produce cement or bricks. While the ultimate goal is to run entirely on clean energy, the reality is that fossil fuels and natural gas are still the most viable option for energy-intensive industries. CCUS provides an alternative option for industry leaders to start cutting their CO2 emissions in the meantime.

Hydrogen as a player

Another key development in the energy world is the use of hydrogen fuel cells. One of the major perks of hydrogen energy is that it does not release any emissions or by-product, although the process of producing the hydrogen can create CO2. There are three main types of hydrogen fuel processes. Hydrogen is an odourless and colourless gas but is coded by coloured names to help clarify their environmental impact.

Grey hydrogen – This is currently the most common form of hydrogen production, as well as the one that produces the most greenhouse gases. Grey hydrogen comes from natural gas and fossil fuels and uses methane steam reformation, without capturing any CO2 emissions.

Blue hydrogen – Blue hydrogen is produced the same way as grey hydrogen, but captures the CO2 produced by fossil fuels. As mentioned before, captured carbon can either be stored or utilised, but will not re-enter the atmosphere. The development of CCUS is still in its infancy, but some would argue that this alternative is a better option than not capturing the carbon at all.

Green hydrogen – Green hydrogen uses electricity to split water molecules powered by renewable energy sources – such as wind and solar. This form of hydrogen production produces the lowest levels of CO2 emissions by utilising green energy sources. Unfortunately, this option is not yet scalable due to the high cost of machinery required and still-advancing technology. Hydrogen, CCUS, and your business

For now, hydrogen still has a long way to go before it is financially or logistically viable for many businesses and CCUS is still in developing phases. It is likely that CCUS, particularly blue hydrogen, will be the first possible step towards eliminating CO2 emissions on a large scale. Both CCUS and hydrogen will be big players in helping the UK reach net zero, so watch this space.